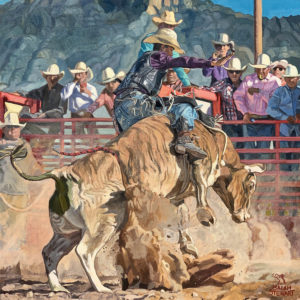 Isaiah Tasunke Wamniomni Luta (Red Whirlwind Horse) Stewart is a Lakota/Mohawk artist.  He received his Bachelors of Fine Arts from the University of Kansas.  He has been an artist his whole life, influenced by his artist parents.  Isaiah is most notably known for taking traditional Lakota culture and giving it context in fast paced technological world.

Creating works through paintings, drawing, and bead work, allows Isaiah to share his gifts and understanding of how Lakota philosophy influences perspectives in modern history and life.

Isaiah makes his home in Kansas with his wife Melissa and daughter Phoenix.

Statement
“The figure and portraits that I create may be historical figures in a modern context by way of place, or friends that I place in a narrative to depict the west.  I am part Lakota of the Oglala Sioux Tribe, and my narrative spans mostly on the cross culture of indigenous peoples with western culture.  I celebrate the cross-culture of cowboys and Indians who represent the last free people living off the land.  Tribes in the reservation era have adapted to Ranch living, using modern materials with traditional teachings to sustain indigenous beliefs in a modern world.  Painting and drawing these characters excite me by my own journey in learning horsemanship from both cultures through wisdom, grit, and faith.” – Isaiah Stewart