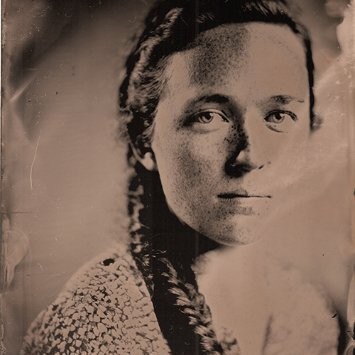 Growing up in the small town of Craig, CO, Taylor Crisp developed a deep love for the landscapes of the Southwestern United States at a young age. She would spend countless hours wandering the sagebrush plains of Moffat County, or the history soaked San Juan Mountain Range hours away, imagining various western or fantasy stories that could take place in these far flung locales. This interest in storytelling took her to the School of Cinematic Arts at the University of Southern California in Los Angeles, where she graduated with a Bachelor’s degree in Film Production and a minor in Environmental Science in 2015.

It was during her senior year at school that she walked into an exhibition of contemporary western art, including a prominent piece by Ed Mell. The simplified forms and dramatic use of color and shape were like a slap to the face. The visuals of her childhood were now given voice in a way she’d never seen before, and she immersed herself in this brave new world of Western Landscape art. Inevitably, she came across the works of Maynard Dixon, who has inspired so many western artists of the last several decades, and from that moment on she has been obsessed with researching and absorbing as much as she can from this 20th century artist whose landscapes so effortlessly capture the spirit of the Southwest she fell in love with as a child.

A self-taught artist, Taylor is currently focused on developing her skills as a painter, and developing her own personal style inspired by the titans of Western art who came before. She spends hours in the mountains around Los Angeles, CA exploring and painting, trying to capture the essence of these recognizable landscapes with as little information as possible, adhering to an aesthetic encapsulated by Antoine de Saint-Exupery’s assertion that “perfection is achieved, not when there is nothing more to add, but when there is nothing left to take away.”

“With no formal art education, I am still actively learning and exploring how to express my vision of the West through different mediums and styles. My most influential teachers are undoubtedly the great artists of the past – Georgia O’Keeffe, Maynard Dixon, Agnes Pelton, Ray Strong, The Taos Society…the list goes on. I hope to present a contemporary vision of the West that draws on the past while reframing those aspects that have been glossed over by popular culture. As a part of the film industry especially, one of my passions is attempting to find the real West as it existed apart from the simplified, whitewashed version found on the big and small screens.” – Taylor Crisp

View All Works by Taylor Crisp
0