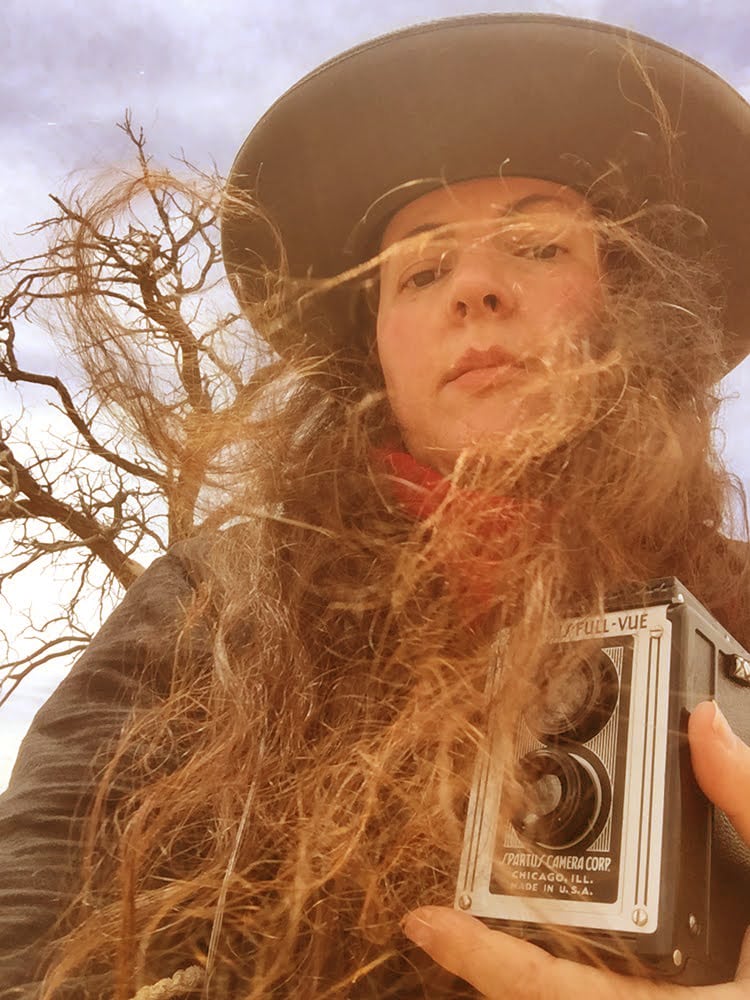 Sara Bloodwolf comes from the Alpine forests of California, descended from performers in Buffalo Bill’s Wild West Show, and legends of the old frontier. Sara’s great, great grandfather, Sequah, performed with Buffalo Bill Cody for crowds and sold a patented cure all “Prairie Flower” in blue glass bottles bearing his name. Her ancestry stretches to the eastern woodlands of the 1600’s where her grandfathers were the literal inspiration for James Fenimore Cooper’s “Last of the Mohicans” tales—the very real exploits of her longhunter family and their fearlessness far beyond what was ever penned in his books.

Bloodwolf started painting as a child and has never stopped. Self-taught, she paints daily and sometimes ’til dawn in her one-hundred year old cabin in the woods. She attests that the characters in her family tree as well as an inherent passion for history are the reason for her subject matter. The adventurer spirit passed down from her ancestors lives strong in her. It’s not uncommon for Bloodwolf’s wanderlust to overtake her and send her traveling the back roads and ghost towns of the American West.

Bloodwolf has created art for a number of well known brands from Gretsch Guitars to Guns N’ Roses, and her fine art can be found in museums and many noted private collections.

“I read Charles Russell used to frequent dusty saloons on the frontier looking for old timers. He would buy them drinks and asked to be regaled with the stories of the wild days of their youth—tales of a frontier life before a world in transition that spelled disaster for so many, and that fascinated me. Older days before the old buffalo trails were covered by wagon tracks, before ancient hunting grounds were plowed into farmland. How amused he would be to know dusty painters are doing the same today, grasping for the past but looking for his own ghost—I assume his specter—surrounded by the companion souls of old cowhands and Comanche, among smells of sweet whiskey, ink drying on paper and turpentine. He shouldn’t be too hard to find.”

View All Works by Sara Bloodwolf
0