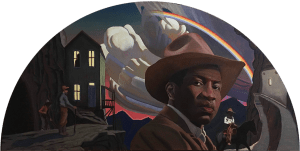 Interested in storytelling from a young age, Taylor attended the School of Cinematic Arts at the University of Southern California in Los Angeles, where she graduated with a Bachelor’s degree in Film Production and a minor in Environmental Science in 2015. She currently works as a Producer’s Assistant in Hollywood and spends her weekends volunteering as a Fire Lookout and advocating for legislation to combat climate change. She is a “self-taught” painter, only in that she didn’t attend art school, but of course draws influences from all the greats who came before. She has spent enough time staring down Maynard Dixon paintings at various museums to fulfill the hour requirements of a PhD program.

Statement
“My constant struggle as a Western artist has been to do justice to the incredible landscapes and people of the American West while adding a new perspective to a genre with such a long and storied history. The West has been plundered for all its riches by the arts – whether through painting, film, fashion, or literature – and little has been left unsaid. Rather than invent a new post-modernist conception of a horse consisting of a single black line and bits of plaster flicked from the end of a toothbrush, I’ve instead tried to adhere to the spirit of some of the early masters’ work, encapsulated by Antoine de Saint-Exupery’s assertion that ‘perfection is achieved, not when there is nothing more to add, but when there is nothing left to take away.’ To this end my work attempts to present the West not through a photographically real lens or groundbreaking perspective, but simply distilled down to its most basic forms and elements.” – Taylor Crisp