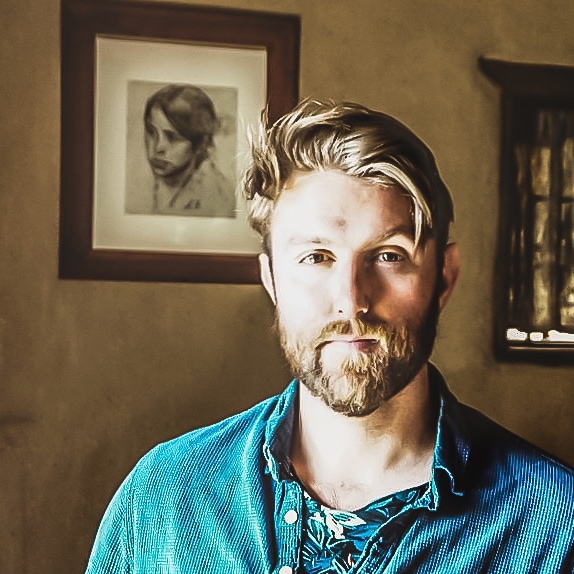 Born and raised in Taos, NM (1988) Aaron grew up surrounded by art and creativity. “I have drawn for as long as I can remember,” he says. His mother is an accomplished artist, as was is grandmother. In his late teens he won a number of awards for his portraiture, “I’d grown up watching my mom and her friends make it as artists, but it wasn’t until winning the awards and selling those pieces that it occurred to me I might be able to do it too.” Years later he began working to make that thought a reality, “One of my art teachers, David Leffel would joke about the horror he experienced when he thought of working a non-creative job. I really could relate to that.”

Aaron’s search for creative work took him to Los Angeles where he did freelance graphic design, however, he did not find the creative freedom he had hoped for. He eventually returned to New Mexico. He sought out teachers and creative opportunities that would allow him to develop his skills further. “Representational art isn’t easy, I’ve had the great good fortune of getting to work with and learn from some very accomplished artists.” He was a live-in apprentice to Sherrie McGraw and David Leffel. He studied briefly at the Watts Atelier. He maintains friendships with many Taos artists today. He also adds that “Taos is one of the most creatively and culturally rich places around. It’s a good place to be pursuing life as an artist.”

Aaron’s work seeks to express the core personality of the subject that he is painting or drawing. Although this is a more modern approach, his work is informed by technique and traditions of the past. It is this blending of the old and new that makes Aaron’s work especially dynamic and exciting.

“My work seeks to express the core personality of the subject that I am painting or drawing. Viewing the medium itself as a vehicle for such expression, I explore the abstract qualities of paint and charcoal in conjunction with endeavoring to showcase an emotional quality unique to my subject.” – Aaron Garlick

View All Works by Aaron Garlick
0