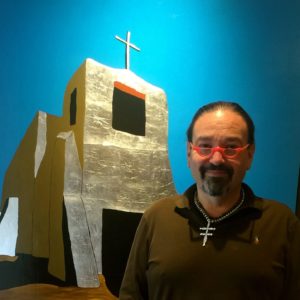 Born in Santa Fe, descendent from generations of New Mexican ranchers, Gill-Tapia’s many life experiences have culminated in his current paintings: The Architectural Series.

A precocious talent in drawing, photography, weaving, and ceramics opened the door for him, to a four year long association with his mentor, Belgian weaver and painter, Maud Henon (UNESCO RECIPIENT for her Tapestry Work). Myriad studio hours, artistic guidance, and numerous trips to the studios and museums of Brussels, Bruges, Amsterdam and Paris while under her tutelage, further developed his skills, and firmly planted him on this lifetime path.

Ten years in New York City followed. Classes in painting, drawing and anatomy from the masters at The Art Student’s League of New York, The New York Academy, and the National Academy of Art. Gill-Tapia served as monitor, as well as teaching classes to both youths, and adults during this period. He later maintained a studio in the city, taught privately and showed at the Javit’s Center, The Red Hook Gallery, The Brooklyn Waterfront Society, and Soho’s New Century Artists.

Today, Gill-Tapia has returned to his native Sangre de Cristo Mountains, and lives and paints in his beloved Santa Fe. The Southwest provides the inspiration, subjects and light that are his work. His century old familiar roots, tracing back to Madrid, bind him to those architectural traditions of the great masterpieces of Hispanic art: The buildings in New Mexico, Arizona and California are his constant inspiration. He has photographed and sketched them devotedly, eventually evolving his present semi-abstract, yet three dimensional style. For emphasis and contrast, he places these often fragmentary, often complete images against stark monochromatic skies.