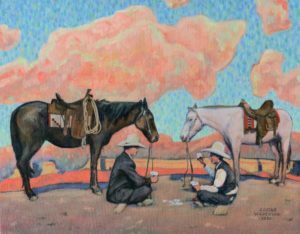 Lucile Wedeking (b. 1981) is an artist and archivist based in Stamford, Texas. Raised by artist parents, she has painted and studied art her whole life. Growing up traveling between her childhood home on the beach in Santa Barbara, California, and her grandmother’s ranch in rural West Texas instilled a lifelong love for the American West and the beauty of its wide-open natural spaces. Her early exposure to a wide circle of eccentric family and friends, including artists and innovators James D. Armstrong, Ken Price, and George Greenough has had a profound effect on her love of vibrant color, design, and storytelling and is reflected through personal influences on her sense of style and development.

At 18 years old, Lucile attended the Parson’s School of Design in New York City and graduated with a BFA in 2003. Her professional training at Parson’s led to a student CFDA Award and her first decade of adulthood working as a designer in New York’s fashion industry. Eventually, the fast pace of a successful life in the city grew tiresome and she found solace retreating to the wild country of those childhood adventures back in rural West Texas. Her love of art and history led to the next progression in her career, working as an archivist at the Cowboy Country Museum in 2011, eventually becoming the museum’s director in 2017. While head of the museum, she began a partnership with Texas’ iconic SMS Ranch and the Swenson family organizing the historical contents of the ranch’s vast archive which she continues independently to this day.

Though she became disciplined in drawing and the classic fundamentals in art school, she is completely self-taught in oil painting and has made it her primary focus since 2009. Lucile describes her work as “Old West meets New West,” favoring a surrealist dreamscape of modern color interpretation over the dusty muted palettes of more traditional styles of Western Art. Among her influences, she credits the stories and images found on her archival treasure hunts and her years spent surrounded by the original works of Cowboy Artists Tom Ryan, William Moyers, and Wayne Baize in the museum’s permanent art collection. She finds her muses in the real subjects of early-day cowboy history as well as in favorite artists Maynard Dixon, Frank Tenney Johnson, N.C. Wyeth, Paul Gauguin, Gustav Klimt, and Salvador Dali.

Besides painting, Lucile enjoys time spent ranching Brangus cattle with her husband and family. She serves as the founder and art director of the Painted Ponies Rural Arts Program, a mission-driven project dedicated to providing fine arts education to rural children. Under her leadership, the children of the program collectively won the “Symbiosis” art contest by artist Mark Maggiori in June of 2019. She is a current director on the board of the Stamford Art Foundation, the longest consecutively running Western Art show in Texas. Her work hangs in private collections across America, as well as in Europe and Australia.

Statement
“The Sepia Cowboys of the SMS: This series of cowboy paintings began quite subconsciously almost a decade ago while working as an archivist in early ranching photograph collections. These stories are influenced by my time as Director of the Cowboy Country Museum and in my continuing partnership with the Swenson Family, organizing the historical contents and photo archives of Texas’ iconic SMS Ranch. As with film negatives, years of archival digitization has led to these century-old sepia cowboys burning their impressions into the back of my mind. Over time this exposure has developed more vividly, like scenes from old Western movies, with these characters riding through painting my dreams. And so, here we are now getting them out on the canvas.

These dreamscapes come backed with a heavy art direction from the great Maynard Dixon, who’s style is a loudly celebrated muse in the series. The work of ranch photographers Ray Rector, Frank Reeves, Hildebrand, Bryant, Edwin E. Smith, Eben B. Low, Hugh Vinson, Sam Clemons, Frank Tenney Johnson, and Eric A. Swenson should also all be referenced and given credit where it is due. Their artfully captured images serve as a time capsule that holds the grit and honesty of daily life at the SMS Ranch from the 1880s through the 1930s.

The stories, tall tales, and legends of the cowboys of the SMS, such as “Scandalous” John Selmon, Joe Ericson, “Windy” Bill, Doc Ellis, “Dippe” Holmberg, Buster Lee, and Jake Raines (and their annual Texas Cowboy Reunion) have reached a near-mythical status in Western history and culture. May we remember these were real-life cowboys. It is an honor to give a little more color to these long-gone characters and pay homage to their legacy by sharing their stories with new audiences through these paintings.” – Lucile Wedeking 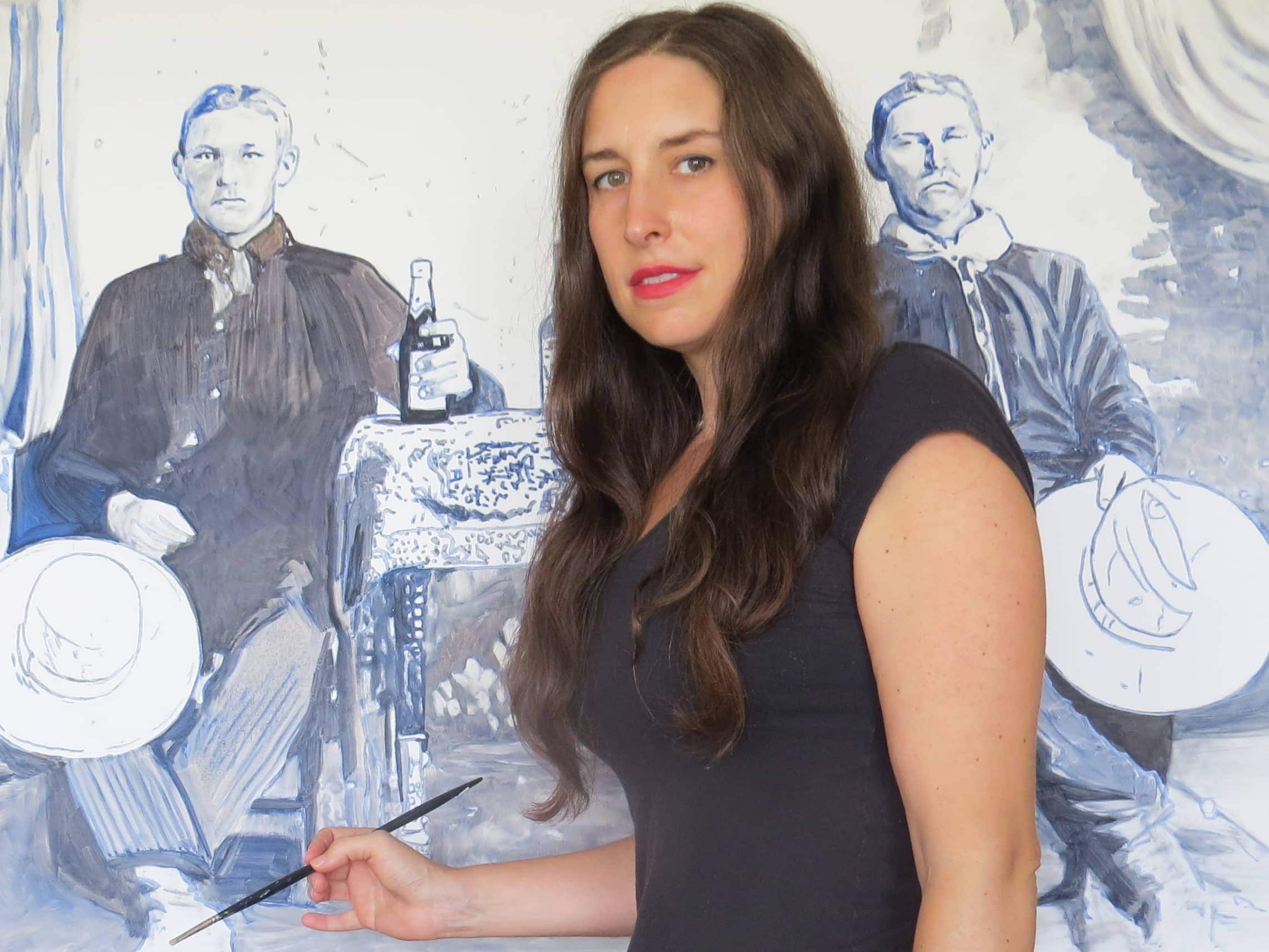 Lucile Wedeking (b.1981, San Francisco) is a contemporary painter focused on historical ranching subjects and modern life in the rural West. Professionally trained at The Parsons School of Design in New York (BFA 2003), she currently resides outside of Stamford, Texas where she enjoys life ranching Brangus cattle with her family.