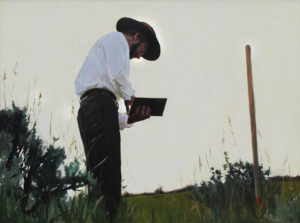 American, b. 1991. Irons works predominantly in the medium of painting.

Primarily a self taught painter, Morgan Irons began studying painting in 2015 following her move to a rural piece of land in Montana. It was then she began studying the work of master painters and has since sought out workshops with some of the top representational painters today. A figurative painter by nature, Irons believes in painting solely what she knows best, life on the land she lives. Her paintings are narrative and timeless in theme and palette.

“I find Morgan to not only have highly developed technical painting abilities, but a burning desire to have her work represent something more than an image…she understands that true Art becomes something more than itself. When I view her work I am inspired to THINK about it, to explore and ponder what poets refer to as “the Great Thoughts”. This is as Art should be, not just clever beautiful images, but reflections upon the human condition and culture. Morgan Irons is a true artist.” -Michael Ome Untiedt

Morgan Irons has been a featured artist in Fine Art Connoisseur’s “Artists to Watch”, Southwest Art Magazine’s “21 Under 31: Young Artists to Watch in 2017”, and Big Sky Journal’s “Ones to Watch”. She is a two-time recipient of the 2018 Elizabeth Greenshields Foundation Grant for emerging figurative painters. Irons is represented by Old Main Gallery in Bozeman, Montana where she currently lives and paints in a cabin on a mountaintop.

Statement
“A few years ago I painted a small vignette of a solitary woman standing with a shovel in a vast, flat field. While technically unambitious and hastily painted, this image, in all its brevity was my first successful painting. “Field Waltz” became a marker for the direction my work would take since. My inaugural solo exhibition “To Make a Prairie” was an expanse on that scene.

“My work is a collection of quiet figures in the landscape. With their visual austerity, each painting is designed for a noted emotional resonance using a palette of timeless earth colors. Inspired greatly by realist artists such as Winslow Homer and Andrew Wyeth, these paintings mark a compulsion for delineating the vertical of the individual against the horizon of the landscape. I believe there can be found the iconography of the mother and child, or of the father, the farmer and the boy. They are a tribute to the power of story found in the land- scape of the West, a stage for narratives of life, death, and what happens in between.

“With a deep sense of place, I live and paint out of a cabin high on a mountain top in Montana. This is a deliberate choice as I have found the solitude provides a quality of stillness that appears in my art. It is with careful intention that my work be informed by academic realist training, but grounded in an earnest expression that comes from being primarily self-taught. My paintings are done in a traditional manner, in oils on archival wood and linen. The surfaces are built with layers of new paint over dried brushwork, using techniques developed by Old Masters to create luminosity and depth. Technical ambition is respected, but the interest is to show evidence of time spent and interaction between myself as the artist and the surface. However, telling the story in the painting sensitively is regarded above all else.

“As I move forward with new work this year, I am still (and forever) drawn to exploring these themes of the narrative figure, with a developing hand and mind.” – Morgan Irons