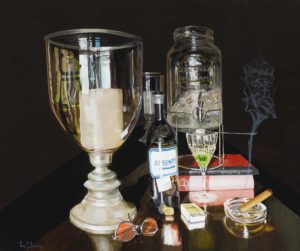 Lew Brennan was born an artist. He has been painting and drawing from the day he could hold a pencil and selling art and winning local art prizes by the time he was a teenager. His passion for realism predates the American Super Realist genre, a school that captured his attention later in his teenage years at a time when Australia was fixated on abstraction and representational styles. Self taught he is committed to working freehand in his own style of realism reflecting on the rural nature and culture of the region that he lives in and which is scattered throughout the Western world. Lew lives and works on a secluded farming property in a hidden valley near the small country town of Cooran, in the state of Queensland which he and his wife and two sons have worked for 40 years raising Quarter Horses and Beef Cattle. He has for some years worked full time in his art studio creating work which reflects the rural life he lives and of others who engage in that life and culture. His art is highly sought after by those who respect realism in art.

Statement
“It’s about the real deal. Finding and tracking the heart of a constantly changing rural phenomenon. From having worked and talked with the sons of the pioneers, through the constant cultural changes and challenges of identifying authenticity in each new generation, this is where I find inspiration.  Capturing the contemporary rural heart that is still beating is where realism and ruralism crash into each other. Here is the reason for my ongoing search for the truth. It is about getting to the absolute core of reality and place in such a way that the emotional triggers captured on canvas or paper are transferred to the viewer, whether through portraits, equestrian studies, still life’s or landscapes.” – Lew Brennan