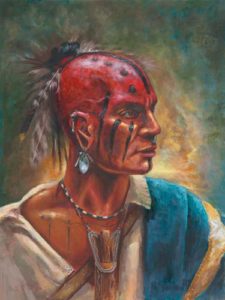 He Walked These Same Trails

Steve Schreiber was raised near the rural New Jersey town of Farmingdale, located in Monmouth County. In his early 20’s, Steve moved to Northeast Ohio, and soon after attended the Art Institute of Pittsburgh, graduating with a focus on illustration and design. His interests have led him to follow a variety of career paths including children’s educational publishing, arborist & tree climber, and management of a zipline canopy tour. He is now returning to his passion for painting, saying “I am excited about my prospects for a future in fine art. It feels like the right time. If I can express myself creatively, and have some positive influence in the world, I’ll be very satisfied.” Steve lives in Parma Heights, Ohio where he paints, enjoys the outdoors and time with family.

Statement
“I’ve always been fascinated with the human face and how subtle expressions tell a story. To me, these expressions are a language that we all have in common. My interest in the indigenous people of America has been a lifelong passion. I tend to gravitate back to them as a subject in my work over and over again. Standing Majestic and Precious Burden are my representations of photos from the first decade of the 1900’s. The strength of the subjects in those photos was inspiring to me and I felt that they needed to be seen in color. I hope that I’ve done them justice. He Walked These Same Trails is my portrait of a young Lenni Lenape man in the mid to late 1700’s… when the Ohio Country was the American west. My hope is that these three paintings show my immense respect for this continent’s first nations and the deep human emotion that I see in their eyes.” –Steve Schreiber