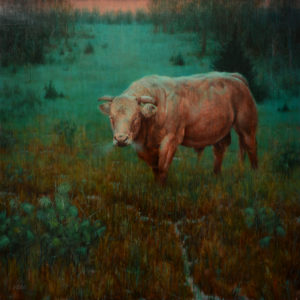 R.D. Mitchell was born in McKinney, Texas in 1954. He graduated from East Texas State University – now, Texas A&M Commerce – with a B.S. in Advertising Art. He spent 40 years in the advertising, design and illustration fields where his work consistently received international recognition. In 1998, The Dallas Society of Visual Communications, honored him as “one who has made the most significant contribution to the advancement of creative standards in the Southwest United States.”

In 2015, he began painting in earnest. Most of his work is related to his rural roots and passion for the equine sport of Reining. He began showing his work in 2017.

Statement
“I’m a Texas rancher and horseman. Perhaps entering this show is a long shot, because I don’t paint traditional cowboy images. Consider me a Regionalist. Like 20th Century Regionalism, most of my images are created from remembrance.

The Watchman’s Warning is about a time past. I was baling hay and racing a summer thunderstorm. It’s as if the critters were watching to see if I could finish in time. The landscape is how I think of our ranch.

Cold Rain is a remembrance of driving past a neighbor’s pasture. His bull was very alone in the winter rain. That vision of loneliness and dejection still haunts me.

Whoa! is as close as I’ve been able to come to painting what a sliding stop feels like on a Reining horse. Reining was my sport. The horse slides for 20 feet to a stop and disappears from under the rider. It’s a rush! In Reining, the horse is judged on willingness, athleticism and ability to handle the least amount of direction from the rider. The rider isn’t judged, so that’s why my rider is cropped. Essentially, Reining is a Western arena contest to see whose horse is the most broke. With maneuvers like spins, stops and lead changes, some think of it as dressage at speed.” – R.D. Mitchell