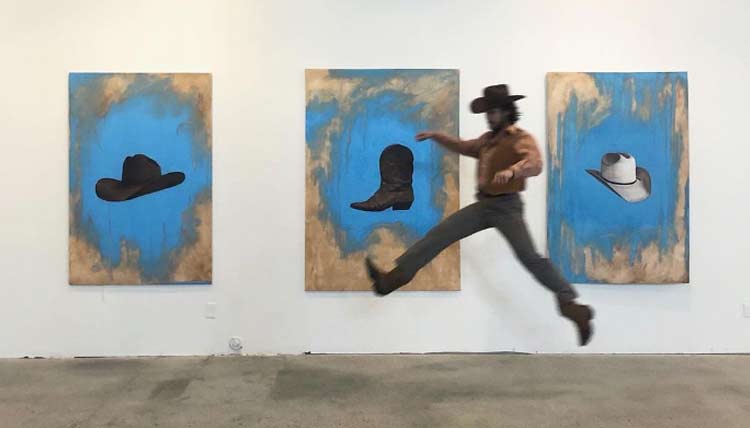 Dylan Roworth is an artist of mixed Indigenous and rural-Anglo heritage. His mother’s family hails from the Me-Wuk band, originally from the Oklahoma Territory, and subsequently relocated to Central California. His father’s family is from Kilarney, Ontario (South of Sudbury, North of Georgian Bay). Dylan’s broader body of work confronts our desire to figure out where we are from, who we are, and the identity we want to construct and project to the wider world.

The cowboy has become a mythical being, becoming a symbol of melancholy individualism. Isolated in their own self deprecation, and continuously searching over horizons. These feelings can be familiar to all, and easily expressed through sad country music. Cliches of country music and western aesthetic are the foundation of my work. Relating city living with the romantic view of the cowboy’s loneliness, echoing the 1980’s urban cowboy movement, in all its theatrical silliness. This (on-going)project has become an indirect autobiography, where the lines between painter and subject are blurred.

View All Works by Dylan Roworth
0